Cooper Basin explorer Real Energy (ASX:RLE) just struck major gas zones in its most recent appraisal well. That’s now two successful wells from two attempts. The Cooper Basin is Australia’s hottest gas province where a frenzy of M&A activity over the past years has left RLE as the sole remaining junior with 100% control of its tenements. The M&A activity has not let up, a few weeks ago Santos farmed into New Standard Energy’s acreage in the Cooper in a deal valued at $49.15M – implying an acreage value of $224/acre... RLE is currently valued by the market at under $30/acre... RLE’s follow up well Queenscliff-1 was just drilled to its final depth and has hit a net material gas pay of 67m in the same gas saturated Toolachee and Patchawarra formations as that RLE encountered on their first well. That first well was the Tamarama-1 well which hit 87m of net gas pay... Queenscliff-1 also hit a new gas saturated layer – the Nappameri formation – with 10m of net sandstone gas pay (from gross 30m). Flow testing will be conducted next year, and RLE will engage an independent engineering firm to prepare a report on the gas resources. RLE’s internal estimate of the proven, probable and possible (3C) contingent resources of both wells is now in excess of 1 Tcf of recoverable gas – that is more than three times what RLE were originally targeting (300 Bcf of 3C) as part of the original three well program. Gross sandstone reservoir pay thickness, average effective porosity, and gas saturation are significantly higher than pre drilled estimates... RLE is getting some serious momentum now, especially after it successfully raised $5M through a placement to funds, professional and sophisticated investors to continue its exploration work. RLE is making all of the right moves to make the Cooper Basin’s next big discovery AND making itself an extremely attractive takeover target.

When The Next Oil Rush first invested in RLE back in May of 2014 we wrote up its plans with this article – International Feeding Frenzy in Australia’s Hottest Shale Gas Region Puts Undervalued Junior on M&A Radar . Since this time, RLE has risen as high as 120%:

The past performance of this product is not and should not be taken as an indication of future performance. Caution should be exercised in assessing past performance. This product, like all other financial products, is subject to market forces and unpredictable events that may adversely affect future performance. By August, RLE was accelerating its drilling plans and we covered this quick work in Maiden Well Spudding Imminent for RLE’s Red Hot Cooper Basin Gas Play. That maiden well, Tamarama-1, struck gas saturated formations and all the details on that well can be found in this article: Success for RLE on First Exploration Well – Follow up Drilling Coming Soon . The follow up drilling has now been completed, and the Queenscliff-1 well was again successful. A geologists report prepared for RLE says the ATP927P and ATP917P tenements these wells are testing could hold a mean gross estimated petroleum in place resource of 10.2TCF of gas. RLE is targeting big resources in the short term – its goal is to prove up a 3C (Proven, Probable and Possible) 300 bcf of recoverable gas – that has the potential to be worth over $300M. Internal RLE estimates are in excess of 1 tcf now that the first two wells have been drilled – an independent report will verify this figure next year. Over the coming three years, RLE’s goal is to certify 3P (Proven, Probable and Possible) reserves in excess of 2 tcf of gas: 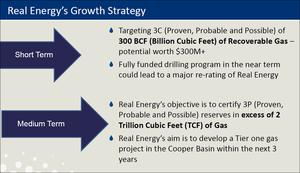 Tamarama-1 on RLE’s ATP 927P tenement was a proof of concept well that tested for the presence of a Basin Centred Gas (BCG) play in the company’s 2 million acre land bank in the Cooper. It hit significant quantities of gas and has now been capped:

Think of this as an enormous game of join the dots, where RLE sinks wells in enough locations to draw a big picture – a Basin Centred Gas Play. 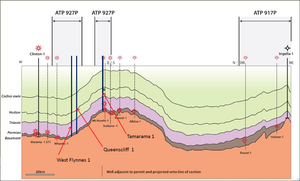 Basin Centred Gas refer to gas in a continuous formation outside of a structural closure – typically holding large gas resources.

Remember, RLE is the very last ASX-listed Cooper Basin junior with 100% ownership of all of its tenements.

It doesn’t have a JV or an earn-in deal...yet... and all the other Cooper juniors have been snapped up by majors or are in the process of it. Hot on the heels of RLE’s gas pay hits at Queenscliff-1, Fosters Stockbroking Analyst Haris Khaliqi issued a $0.75 price target for RLE – that would be a 130% gain from today’s levels:

We don’t take analyst price targets as gospel – they can get things wrong. It’s just another tool we use to assess our investments. With the success of this second well, Mr Khaliqi outlines the potential for the following events for RLE:

Santos recently farmed into New Standard Energy’s Cooper Basin acreage for a total consideration of $49.15M – in return for a 35% stake in Permit PEL 570:

Mr Khaliqi analysed the acquisition metrics for the above deal – applying this to RLE would imply a valuation of $1.54 / share – that would be a 380% gain from current levels:

Again, there is no guarantee RLE will hit this level, the share price is dependent on many factors – it’s a bit more complicated than a simple metric like this – however it does give a good indication of the potential in RLE. RLE is the last of the Cooper Basin juniors with 100% ownership of its tenements. It’s the wallflower at the ball, but maybe we’ll soon see a pack of majors lining up to ask it to dance...

Regular readers of our sites will be familiar with our long-standing interest in high potential stocks. To note just a few:

RLE’s Queensciff-1 well encountered continued elevated gas readings from both the Toolachee and Patchawarra formations as it drilled down to its total measured depth of 3,219 m. 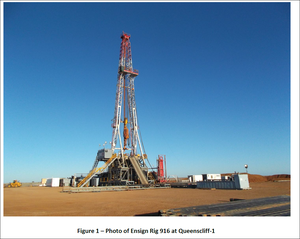 Now that the drilling is complete, the results are in – and they are impressive: 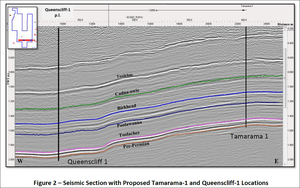 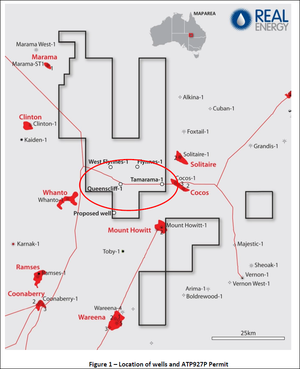 These new results show that Tamarama-1 was not a fluke or was within a structural closure. Queenscliff-1’s gas saturated readings show the Toolachee and Patchawarra formations are spread across its tenements and that gas is accumulated throughout. There is now a very compelling case for RLE to drill more wells and map the extent of this – again bringing it back to confirming a BCG play. In the image above you can see West Flynnes-1 – that’s RLE’s planned next well and RLE will likely tackle this in 2015. Third-party geological analysis has assessed RLE’s land holdings to contain a mean gross estimated petroleum initially-in-place of 10.2 Tcf of gas in the Toolachee and Patchawarra formations. It now has two wells that show strong gas shows from these formations.

To support its rapidly accelerating exploration and drilling programme in the Cooper, RLE has negotiated a private placement to funds, professional and sophisticated investment – and raised $5M:

The placement was significantly oversubscribed, showing just how high demand is for Cooper Basin action – especially with a company like RLE that’s relatively early stage but steadily proving up its acreage. RLE will issue 16,129,033 ordinary class shares at $0.31 per share, raising $5M, which will be used to support its ongoing exploration activities.

After RLE’s maiden well in the Cooper – Tamarama-1 – struck gas zones, the company knew it was onto something – the Basin Centred Gas play it has long suspected is present within its lands was becoming even more clear. Now that its second well in the area – Queenscliff-1 – has hit strong gas shows from the same formations Tamarama-1 hit, the Toolachee and Patchawarra, the picture of a BCG is getting even clearer. Flow testing will occur on both wells next year, and from this data, an independent resource estimate will be completed. RLE’s internal estimate of a 3C contingent resource in excess of 1 Tcf is an excellent result from two wells to date. RLE’s medium term goal is to develop a world class Tier 1 gas project, and they seem to be well on their way. RLE are also planning to drill another well, West Flynnes-1, which looks like a goer in 2015. If RLE can prove it has BCG on its land then the major gas producers who surround it could soon be doing more than just sitting up and taking notice. There has been a frenzy of M&A activity this year in the Cooper Basin and RLE is the final junior remaining with 100% ownership of its tenements. How long can that last now that it has two gas-saturated wells? RLE is cashed up with $5M hitting its bank account. It has two wells with gas-saturated readings. This year has been about proving RLE’s concepts. Next year things should really heat up for RLE – if they don’t get taken over first...