Real Energy’s (ASX:RLE) maiden exploration well in Queensland’s Cooper Basin has just hit a major gas zone – recording strong readings in both of the basin centred gas formations it’s targeting. This is a great result for the junior explorer and RLE are now pressing ahead with a second exploration well to be drilled shortly. This should only take a few weeks to complete. The Tamarama-1 well on RLE’s ATP 927P tenement was a proof of concept well that tested for the presence of a Basin Centred Gas play in the company’s 2 million acre land bank in the Cooper. Basin Centred Gas refers to an accumulation of gas outside of a structural trap. Whilst it is still early days for RLE’s exploration, the concept appears well on the way to being proven on RLE’s acreage. This maiden well struck a material 87m of net pay with 21m of net sandstone gas pay (from gross 44m) in the Toolachee formation, and 66m of net sandstone pay (from gross 121m) in the Patchawarra formation. The formations are therefore gas charged. By hitting strong gas readings with its very first well, RLE is validating and de-risking their acreage. At the same time, RLE remains a high risk investment, as the company is still in the early exploration phase. Overall, independent estimates have given RLE’s likely gas-in-place at 10.2 trillion cubic feet (tcf)... RLE aren’t stopping at one well – they have firm plans for the follow up well, and there is also potential for a third in succession. Amongst a sea of M&A activity, RLE’s acreage remains 100% owned. With Australian east coast gas prices set to triple in the coming years, we aren’t sure how long RLE will remain this way:

When The Next Oil Rush first invested in RLE back in May of 2014 we wrote up its plans with this article – International Feeding Frenzy in Australia’s Hottest Shale Gas Region Puts Undervalued Junior on M&A Radar . By August RLE was accelerating its drilling plans and we covered this quick work in Maiden Well Spudding Imminent for RLE’s Red Hot Cooper Basin Gas Play. And now here we are – Tamarama-1 spudded on the 8 th of September and now we’ve got big whack of saturated gas readings in our hands. RLE has risen 80% since we first brought you the story: 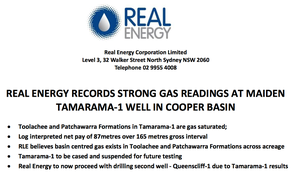 RLE is the very last ASX-listed Cooper Basin junior with 100% ownership of all of its tenements.

It doesn’t have a JV or an earn-in deal – yet – and all around it juniors are being snapped up in a frenzy of M&A activity to sew up acreage in the Cooper Basin – Australia’s most prolific onshore producing basin. Most recently Drillsearch’s takeover of Ambassador Oil and Gas, but also farm out deals have been struck with heavy hitters like Senex, Origin and Chevron.

RLE still has a relatively small market cap of around $60M at the moment, when compared to the potential upside. If RLE can discover a multi TCF gas field, RLE could be rated much higher by the market. The latest note from Fosters Stockbroking maintains a speculative buy price target of $0.75 – a 100% gain from current levels:

We don’t solely rely on analyst price targets – they can get things wrong, and it’s only one tool we use when making an investment decision. Before results were released on the Tamarama-1 well, Analyst Scott Ashton from BBY released a price target of $0.70 – almost a 90% gain from current levels:

Once again – RLE is still a high risk, speculative investment – the BBY price target may never eventuate. In the following sections, let’s drill into the detail of RLE’s current work.

Regular readers of our sites will be familiar with our long-standing interest in high potential stocks. To note just a few:

RLE’s maiden exploration well – Tamarama-1 – was spudded on the 8 th of September into a geological model that looks like this: 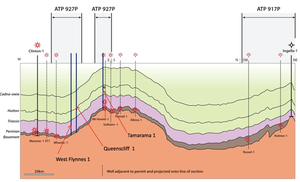 The image above shows RLE’s understanding of a potential Basin Centred Gas Play (BCG) on their acreage – a continuous concentration of natural gas deep below the ground. The three tenements indicated at the top of the image are owned by RLE and you can see the line indicating the Tamarama-1 well locating in the middle of permit ATP 927P. Seismic surveys have confirmed that two major Cooper Basin gas formations known as Toolachee and Patchawarra run through all of RLE’s tenements – Toolachee can be seen second from the bottom in the slide below: 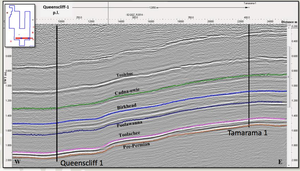 The Tamarama-1 well was designed to confirm the presence of gas in these formations so RLE can press ahead with a wider drilling programme to test for BCG on all its tenements. And it’s worth finding out – an independent geologists report prepared for RLE says the ATP927P and ATP917P tenements could hold a mean gross estimated petroleum in place resource of 10.2TCF of gas... Now RLE is a big step closer – Tamarama-1 has been drilled to a depth of 2,574m at the ATP 927P tenement and strong gas readings were measured. 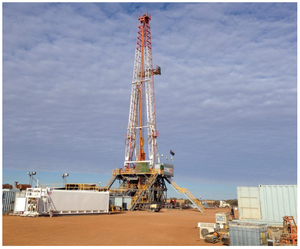 RLE’s drill bit encountered thicker than expected Permian Toolachee and Patchawarra formations so it went deeper than first planned. It was worth it. The well encountered 21m of net sandstone gas pay (from gross 44m) in the Toolachee formation and 66m of net sandstone gas pay (from net 44m) in the Patchawarra formation. This confirms the formations are gas saturated... The well will now be cased and suspended for future flow testing. So RLE is chalking Tamarama-1 up as a success. Now for the next move: 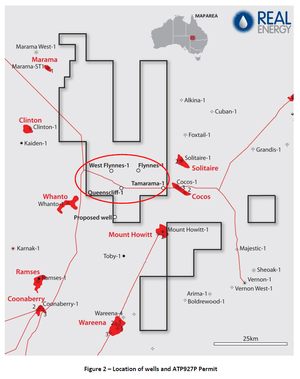 In the picture above you can see a tenement with a border that looks like a tuning fork – that’s ATP 927P and Tamarama-1 is in the bottom right corner. Now, just to the left is RLE’s next exploration well – Queenscliff-1 . Now that RLE knows for a fact that it has gas-saturated formations at the Tamarama-1 location it’s pressing ahead with drilling at the Queenscliff-1 site. This is an enormous game of join the dots and when it’s finished we could see a multi TCF gas reserve under RLE’s control. At the same time, it is RLE’s very first exploration well and it’s still early days on the path to confirming any gas reserves. Tamarama-1 has kicked things off in style, but now the real work begins.

One successful well drilled – another on the way?

The success at Tamarama-1 means RLE can now press ahead with its next well – Queenscliff-1 – with the sure knowledge that it’s drilling in gas saturated ground. Anything it finds from now on will further illuminate its knowledge of the potential Basin Centred Gas play in its tenements. We should see an announcement from RLE in the next few weeks about its plans for Queenscliff-1, and maybe even some in-depth drilling results for Tamarama-1. No matter what though, we now know that RLE has gas in the Cooper Basin. The only questions left are: how much is there, and can it be commercially viable to extract? This is going to take a few more wells at least. Keep drilling RLE!