Is a Farm-in for IPB’s Potential Multi-Million Barrell Oil Asset Just Around the Corner?

It’s been quiet of late for IPB Petroleum (ASX:IPB) and its oil and gas play in the oil prone southern margin of the Browse Basin.

However, that looks set to change as interest from farm-in partners increases, including interest from two advisory firms in the Middle East.

The very tightly held IPB is looking to secure debt financing or facilitate a farm-in with these Middle Eastern investors and, by all accounts, talks are progressing well.

The company has also divested two other permits that were holding it back from concentrating exclusively on what could be a highly prolific asset – exploration permit WA- 424-P in the Browse Basin, offshore Western Australia.

IPB has strategically decided to focus on the asset that offers greater potential for monetisation. Something it feels is in the best interests of its shareholders.

The WA 424P permit which contains three wells, along with the existing Gwydion oil discovery, is now IPB’s primary focus.

Gwydion is part of IPB’s Idris Prospect which was first drilled by BHP in 1995 where it discovered oil and recovered it to surface.

IPB is highly confident that oil is trapped below the structural spill point at Gwydion and is readying itself for a major drill program where it could unlock over 100 million barrels recoverable.

Its major goal is to have Gwydion farmed-in and funded into development. Now with momentum set to pick up, we could see this happening sooner rather than later.

How will IPB go about capitalising on its coming momentum? 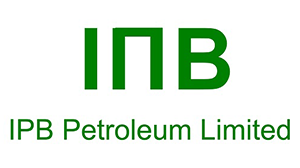 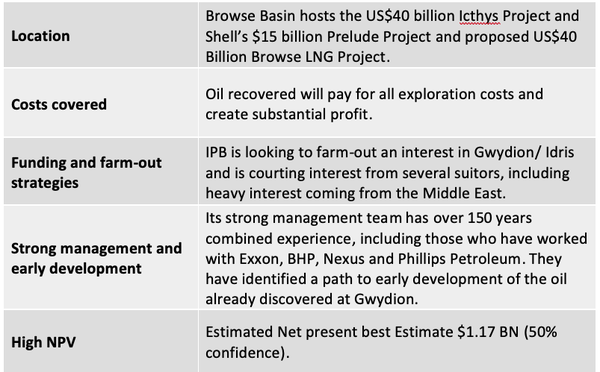 The story so far

We last caught up with IPB Petroleum (ASX:IPB) in March in the article The Oil Junior Set to Unlock Multi-Billion Barrel Value in WA’s Prolific Browse Basin.

The premise of that article hasn’t changed. IPB is still well placed to unlock multi-billion barrel value. However, the company has been slowed down, not only by global uncertainty and specific events in relation to oil supply/demand dynamics, but also by regulatory requirements which it is working diligently to meet.

So let’s quickly recap its assets, where it sits and why, despite being so quiet for the last few months, it remains a strong investment prospect.

Its first advantage is location. 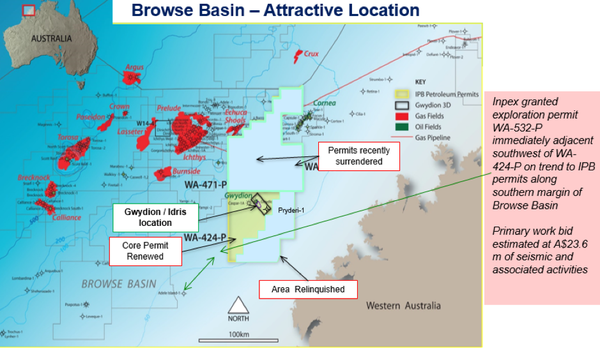 Earlier this year, Japanese oil and gas giant Inpex saw the departure of its first shipment of condensate from its US$40 billion Ichthys LNG project in the Browse Basin, with Inpex general manager of external affairs Bill Townsend saying, "The Ichthys Field represents the largest liquid hydrocarbon discovery since Bass Strait in the 1960s, so a very significant condensate discovery and one of the largest ever discovered in Australia."

"Ichthys is vital to the future of Inpex. Australia is very important in this regard and Ichthys LNG is our pride and joy."

There is a belief among IPB executives that Icthys being adjacent to Gwydion works in the Aussie small cap’s favour. Certainly with the enthusiasm shown by its next door neighbour, IPB could be forgiven for being excited by its own assets.

Its second advantage is the well itself.

There has been plenty of work done at Idris-Gwydion. Detailed technical and commercial studies were completed on the Gwydion oil discovery and proposed Idris appraisal well throughout the year.

New reservoir simulation work was completed in April 2019 along with the development of more rigorous project costings throughout the year. These have contributed to increased interest and confidence in the technical feasibility of the proposed extended drilling, logging and testing program (DTL Project), and a future full field development contingent on success at Idris.

IPB met with NOPTA to clarify that it would be required to apply for a production licence if it wished to conduct well tests for an extended period and recover petroleum for sale.

The company sees no barrier to this.

As part of a renewed farm-out strategy, IPB has continued to have positive contact with potential farm-in partners and their representatives in both Australasia and the Middle East during the last quarter of this year and since year end 2018.

There has also been interest from European and US entities.

Whilst we can’t give too much away about the identities of any potential partner, this strategy would enable IPB to fulfil its ideal goal of having a farminee fund its project into development.

Interest comes on the back of solid technical and commercial work completed over the last 12 months.

Discussions have included further appraisal and or development finance should IPB be successful at Idris.

If a farm-out arrangement can’t be reached, IPB’s fallback is its DLT strategy.

Managing director Brendan Brown told shareholders recently, “the benefits on offer remain sound such that an extended well test could better define the size of the reservoir at Idris in the event of success – and particularly in an upside case, whilst providing positive cashflow to offset operational costs. If Idris were to be unsuccessful then a follow up drilling at Gwydion with latest completion technologies could offer a fallback strategy where costs may also be offset by the income from the produced oil”.

In other words IPB can collect the oil, sell it and pay for the drilling from the sale making a nice profit. All without having to flare the oil.

Based on this strategy IPB commenced a multi-disciplined evaluation study covering:

In terms of debt financing, IPB appointed Atoll Financial, an experienced cross-border finance house to arrange funding for the WA-424-P DLT program. This provides IPB with the option to raise the required funds by way of a debt issue with the assistance of Atoll through its network of authorised international financial intermediaries and institutions in the Middle East and elsewhere.

It should also be noted that IPB has completed two successful over-subscribed placements this year. The most recent in May raised $1.13 million.

Then comes the power ... or in this case, the energy

No matter which financing scenario IPB ends up entertaining, there is no doubt it is sitting on a project with great economics, good quality oil and high porosity and permeability.

All of this combined has the potential to assist IPB in unlocking over 100 million barrels recoverable.

As previously stated, IPB’s Gwydion-1 well was drilled by BHP in 1995. The well discovered a 14.5m gas column in a poor-quality glauconitic sand above a 10m oil column in a good-quality Cretaceous-aged Hauterivian/Barremian clean sand.

That is a solid foundation.

When we last caught up with Brendan he told us, “We've already done some reservoir work and realised the Gwydion reservoir could flow anywhere from 10,000 to 20,000 barrels a day. So, that's very, very good for a horizontal well.”

Importantly, there is unlikely to be a barrier or internal seal for the oil column as the following diagram suggests: 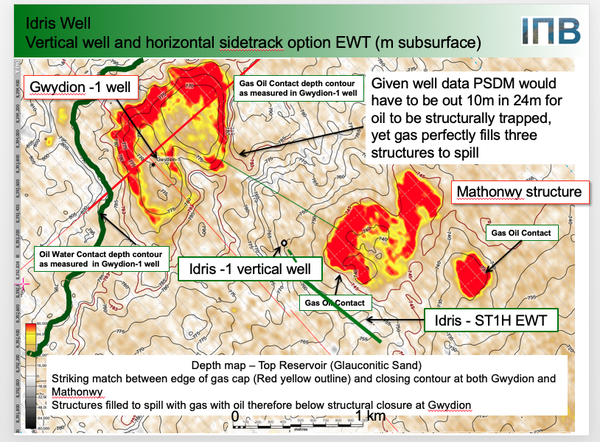 A further benefit is the potential long distance migration of the oil. 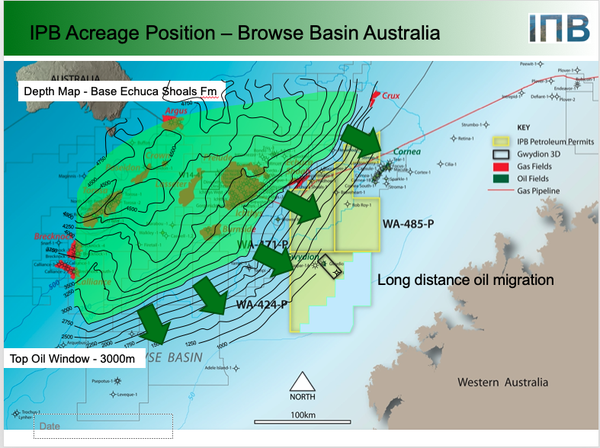 As you can see from the diagram above, the oil already discovered at Base Echuca Shoals is flowing right into Gwydion.

Echuca Shoals-1 was drilled close to the North Eastern margin of the Browse Basin in WA-35-P, approximately 15km west of Prudhoe-1 (not to be mistaken with the prodigious Alaskan oil field).

Here is what Gwydion looks like on a seismic map: 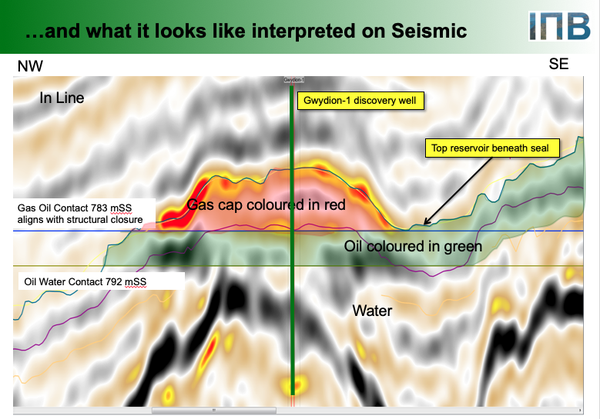 You can see the oil there beneath the surface of the gas cap. With no identifiable isolation between Gwydion, the proposed Idris location and other nearby gas gaps, this all leads to a significantly larger stratigraphic oil trap: Pmean ~100 MMbbl.

Finally, here is the size of the prize: 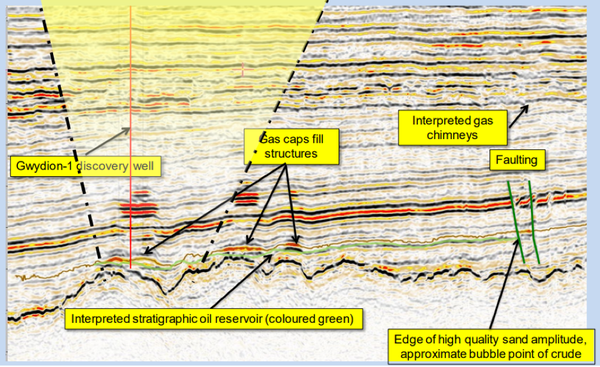 IPB believes there is oil in them ‘thar’ hills, and isn’t too far away from enacting a strategy that helps it recover the black gold.

Then comes... the valuation

The oil is likely to be there, so how do we value what IPB has?

Based on publicly disclosed resource ranges, and assuming Idris-1 is successful, the net present value (NPV) looks like this:

The commercial threshold is only <10 MMbbls, so there’s a high estimated chance of commerciality of around 98% if the proposed drilling of Idris-1 successful.

Keep in mind that the potential for the Idris resource is significantly larger and development will be quite quick: 18 months appraisal well and FEED to FID, followed by 18-24 months detailed design and construction, could be accelerated with EWT.

Idris will likely be drilled late 2020 or early 2021, but there are plenty of catalysts to come. Most notably the security of a farminee.

If IPB can bring a partner on board soon, the Idris-1 well will be fully funded, with Idris-1 used to appraise the updip extension of oil discovery at Gwydion for development.

IPB will aim to move straight to early development if Idris is successful. Development is likely to occur early 2022, with first oil projected to hit mid 2024.

If IPB goes down the DLT path, it will require $60 million in funding with a projected payback of 24 months. IPB has committed to oil in 12-18 months in this scenario.

Oil recovered will be sold and pay for costs.

The Idris well is a shallow, low cost well and while the oil price has dipped since we first looked at the company earlier this year, it is still significant enough for IPB to come out on top.